So, the cat is out of the bag, I supposedly set a new age group record at Timberman this year. 🙂
But it almost did not happen. Why not? Read on.

Sugar Lake Lodge: This is one of the cover images of the Sugar Lake Lodge homepage (www.sugarlakelodge.com). Look closely, it was taken during a Timberman Triathlon 🙂

Morning of the race – close encounter of the “deer” kind 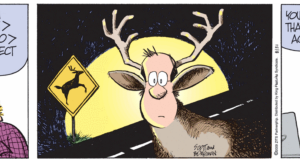 At 4:30 am, we – Lisa & Craig Peterson, who had stayed at my house overnight, and I – made ourselves on the 1.5-hour drive from Bemidji to Sissebakwet Lake south of Cohasset, MN, the site of the Timberman Triathlon. We all three were registered to race, Lisa and Craig the sprint distance, and I the Olympic distance. It was a foggy and relatively cool morning with temps in the low 50s Fahrenheit (low 10s Celcius). As we were zipping along the street leading from my house to Hwy 71 north of Bemidji a deer came running out of the woods across the road. I hit the brakes as hard as I could and we missed the deer by inches. I could swear I heard the deer breathing it was so close. Well, I was definitely awake after that. I don’t think I ever came that close to hitting a deer. A few inches different, a few tenth of a second later, and that would have been the end of my race.

The rest of the trip and race set up went by without any more hick ups or heart pounding other than the one caused by pre-race jitters. As we approached the race site at Sugar Lake Lodge, the sun came out and burned off the remaining fog. It promised to become a wonderful race day with near perfect racing conditions.

Like last year, I went out dolphining as long as possible. This was pretty much the only way I could keep up with Christina Roberts, especially since she had refused to allow me to hang on to her legs. But once I started swimming, I saw the bubbles of her kick for a short period of time and then she was gone. She ended up finishing the swim 1:43 ahead of me in 17:41.

For most part of the first half of the out and back swim, I seemed to swim in second place, when suddenly Andrea Meyer came flying by me as if I was standing still, at least that’s how it felt to me. I was really surprised later when I saw that her swim in the end was only 30 sec faster than mine at 19:24.

On the way back to shore, I was sighting into the sun, which made finding the sighting buoys somewhat a challenge. Luckily they had placed two, big, brightly green feather flag banners on the beach at the swim exit. So I ignored any buoy and swam straight toward the flags.

Unfortunately, this year, I could not chick all of the guys like last year. Four men swam faster than me. 😛

T1 did not feel quite as smooth as the one at Liberty Triathlon:

All of this probably only cost me a second or two, but in this situation it appeared like an eternity. It always feels like I am moving in slow motion during the transitions. 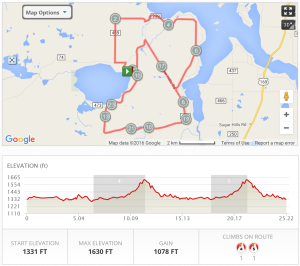 The course is one of the tougher courses I tend to encounter in Minnesota triathlons, with almost 1100 ft gained over a 25 mi course, a Cat 4 and Cat 5 climb and inclines of up to 5% grade – at least according to MapMyRide. The outer 15-mile loop went quite well, but it took its toll during the inner 10-mile loop; I definitely slowed down over the last 10 miles. My glutes were also starting to complain. But, boy do I love those downhill sections!

For 20 miles I rode in third place, and I was hoping that maybe this year I could bring this position into T2. But during the last 5 miles the second and third place finishers from last year passed me, just like last year. A “Sh&t” crossed my lips after the second athlete had passed me and I just couldn’t keep up with her. I’m not someone to be known for using choice words like this, but at this moment I couldn’t help myself.

T2 went really well. I think that was the fastest I ever got into my running shoes. The only way I could improve on the time is by running faster through the transition. I was through transition so fast that I actually came out of T2 ahead of the two women – Sarah Berger & Sara Sampsell-Jones – that had just passed me on the bike.

Within the first mile of the run, the two women pulled up to me again. We were joking that number 6 (Sarah Berger), 7 (Sara Sampsell-Jones) and 8 (yours truly) were now running next to each other. Sarah Berger pretty soon pulled away, after all her legs are about 20 years younger than mine, but Sara Sampsell-Jones stayed within 50-70 yards ahead of me for the rest of the run. I always had her in my sight.

Like the bike course, this is not an easy run course. Coming off the bike, you have to run up two hills to get off the Sugar Lake Resort grounds – not that easy with your legs still in biking mode. After that, it goes slowly but steadily uphill at maybe a 1% – 2% grade, and half of that on a dirt road, until you reach the highest point at the turn around. One would think that the return leg should become easier since it is going slightly downhill now, but remember, you still have to climb those two hills going into the resort again.

As we wound our way along the dirt road towards the turn around, I spotted Neil King, who had started in the wave just prior to mine, ahead of me. Slowly but surely I gained on him. Especially once we were back on the black top roads I could make up some ground on him.

As we approached the entrance to Sugar Lake Resort, I toyed with the idea of picking up my legs and catching up with Neil and Sara. In the end, I didn’t do it. They ended up crossing the finish line about 12 seconds ahead of me. 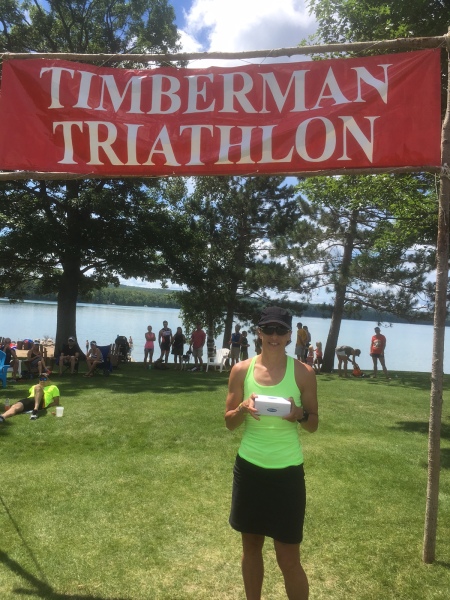 New age group record! That’s always a nice plus! 🙂 Does this mean I’m back to my old racing? Not yet, but I’m getting there!

Compared to last year, I improved my time by about 7 min, however, the swim was shorter this year. But, I also had a faster bike and run this year. So all in all an upward trend.

I love my new Tifosi sun glasses that all age group winners could take home. The Timberman race committee comes up with some of the best awards. The workout bag I won last year is my daily companion.

While waiting for the awards ceremony, the Headwaters Tri group ended up on the patio of Otis’ Grill & Bar, enjoying their burgers and drinks. It’s the perfect place to fuel up after the race, enjoy the company of your triathlon friends, but still be part of the race action. Thank you at this point to Neil and Nancy for paying for my food; they did not want me to have to run back to my car to get my purse. 🙂

Finally, a big thank you to everybody involved in making Timberman an amazing race: the race directors, the organizing committee, and all the volunteers. You were all just amazing! I will be back next year!

Everybody, come on out and join me for the race next year (July 8, 2017) …
… unless your name is Julia or Cheryl; I would just like to keep this age group record just a little longer :-P. Love you ladies!

What’s coming up next?

On August 7, I will be racing the Brewhouse Sprint Triathlon in Duluth, MN.

One thought on “An Age Group Record That Almost Wasn’t”