Liberty: … And Then Came The Thunderstorms

As I was preparing for the Liberty Triathlon, a friend messaged me inquiring about the weather forecast for race day. All the weather apps I had consulted predicted about a 50% chance of rain with the possibility of thunderstorms. I was hoping against hope that he had some different insights and so I faked ignorance, asking if he had checked. His answer was swift: “Mine is wrong. It says rain.”

Rain was supposed to move in over the night hours, but as I woke up in the morning, it was cloudy but everything was dry. Please, please, just hold until after the race!

This was the first triathlon of my season, and so, set up in the transition area obviously also contained some catching up with all my triathlon friends from the Cities, whom I had not seen for pretty much all of winter. A very important part of this sport! Kourtney Haag, who likes to draft off me in the swim asked what distance I’m doing. Julia Weisbecker who was standing next to us, just laughed, and commented: “If Christel ever does a long distance, I will have to check if everything is all right.” How right she is, so far I never had the urge or ambition to go beyond the International/Olympic distance other than the occasional 41.5 miles at Superiorman 41.5.

This year the organizers changed the swim to a two loop swim, to make sure the lifeguards are not stretched as thin as last year with all the big waves. And because they wanted to make sure that all the 70.3 triathletes were at least on their second loop before the Olympic athletes started, they pushed the start for us back by half an hour. This meant 30 minutes more of waiting and sitting around. And of course, like almost always at events like this, the women age 40+ started in the last wave, and had to wait the longest. Such is the life of a female Masters triathlete 🙂 .

When we finally started, the fast elite wave swimmers already started their second loop. I felt somewhat sorry for them as they suddenly were confronted with a wall of hard charging women fighting for a good swimming position.

After a few dolphin jumps I found myself leading all the yellow caps of my wave. Pretty soon I starting passing some light blue and purple caps of the two waves that started ahead of me. For the first lap I was leading the yellow caps, but at the end of that lap Cheryl Zitur was pulling even with me. At the turn around the buoy to the second lap, she hit the better line and pulled ahead of me. I used that to my advantage and latched on to her feet, drafting off her. It was not always easy to stay with her, because of the need to weave around other, slower swimmers.  Roughly 100 yds before the beach I lost her feed, and she pulled away, beating me by about five or so seconds out of the water.

After the race, she asked me: “Where you the one drafting off me? And touching my feet!” With a big grin on my face, I responded: “Yes, but I wasn’t touching on purpose.” Her only response was “I knew it! Bitch!”  Honi soit qui mal y pense!  Cheryl and I are good friends and hard competitors, it was all in good nature!

Like always, I gained time on most competitors with my transition. My wetsuit came off very quickly, but then I found that I fiddled too much with it because I was too particular where exactly my wetsuit came to rest in my transition area. Note to self: It does not have to be positioned perfectly! 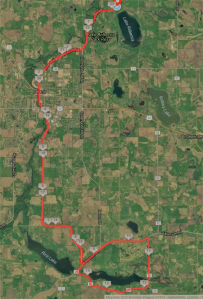 It is no secret that Cheryl is slower in the transition than I am, and so I expected her to race past me at any time on the bike. When at mile 3 I still had not seen her, I was starting to think, “Please let me at least get to the turn off at mile 8, please!”  But shorter after that, she came blasting by me. She yelled at me, “Stick with me!” and all I could think, as her back moved farther and farther away, was “In your dreams!”

As I was heading South on CR 92 around mile 11, is saw lighting in the distance. I did not hear any rumbling, so the storm must have been still some distance away, but it still made me wonder what it might mean for the rest of the race. Will they have to abort/cancel it?

I continued to race around the lollipop portion of the bike course. As I came back to the out-and-back portion of the course, I saw a woman triathlete perform a U-turn to head back to the transition area. Confused I asked: “Did you complete the circle?” “No, they told us to turn around!”  OK, they must have shortened the bike course for some.  The further north I was heading, the more slower cyclists I passed. I started wondering what that would been for the run still ahead of us. As I got closer to Lake Rebecca Park Reserve, and my back started tightening up, and I still had the tough run course ahead of me, the thought popped into my mind that right now I really would not mind if the cancelled the run.

Not knowing what exactly the situation was, I looked around very carefully as I rolled down the hill towards the transition area, and I saw athletes coming out of the transition and heading on the trail of the run course. OK, 10K here I come!

What can you say about a transition that places you in the Top 2 of all women? Well, I wished the tongue of my running shoe had not rolled up on itself.

For me there is only one word to describe this run course: tough!

I have always struggled on this course, and this year was not different. I was fighting for every mile. In the end, my pace was slower than for the Fargo 1/2 Marathon, but it still was the best pace I ever achieved on this course. So, I guess I can’t complain. Even though Cheryl did not only bike circles around me, but she also ran circles around me. We crossed paths about 1/2 mile from the turn around point. So in the end she was a mile and about seven minutes ahead of me. So no surprise that she was the fastest woman on the Olympic course.

I’m not sure my 16th placed run time truly represents my efforts, as most women could not complete the bike course and thus had much fresher legs going into the 10K than I had. 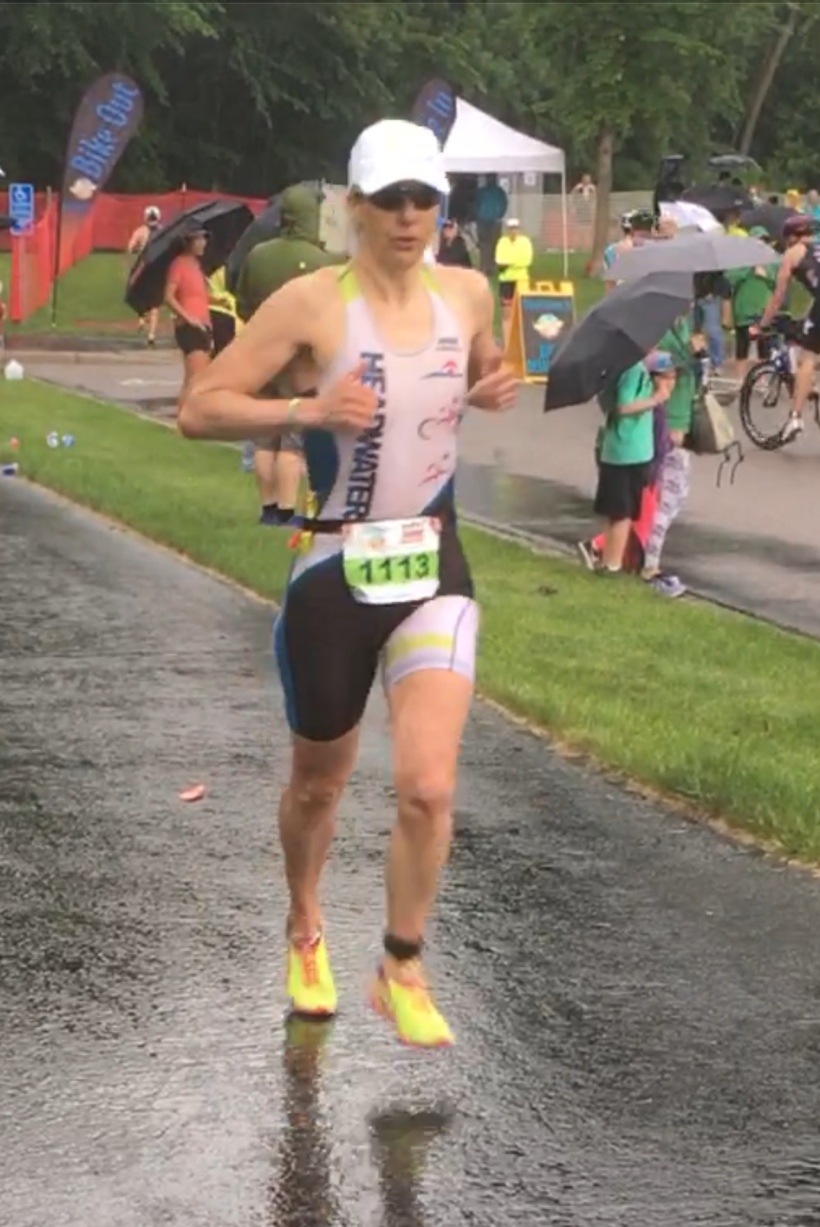 In the end, it seemed that only eight to nine out of 56 women were able to finish the complete Olympic distance course. Interestingly two women that started in the very last wave were among those lucky ones. As Cheryl later put it, we squeaked by, because they must have starting to turn around athletes not long after us. I ended up placing 6th among the women that to the best of my assessment finished the race. (Thanks to Final Stretch for providing me with the raw timing data.) As you probably can imagine, the timing was a mess. There was no way for the organizer to reliably determine who completed the full course. So in the end, no awards were handed out. They can save them for next year 🙂 .

Overall, it was the fastest time I had ever achieved at Liberty, so I should be satisfied with that, right? However, I also know that there is still quite a bit room for improvement leading into my next races.

Thanks so much also the Craig and Lisa for coming out to support me and their other friends. They came and stuck it out in the rain. The rain never really seemed to bother me, yet I saw people on the side of the bike course who seemed to have wiped out on the wet road. And Jerry McNeil in the end had to give up consulting his notes because they had been destroyed by the rain.

The Fabulous 50-Year-Olds rocked again at Liberty, Cheryl and I on the Olympic course and Julia on a shortened 70.3 course. Unfortunately, I do not have a picture of us for this year. Until next year then!

What’s coming up next?